AfCFTA is the biggest trade area in the World – GiTFIC 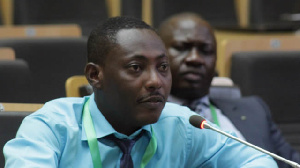 AfCFTA is the biggest trade area in the World – GiTFIC

Chief Executive Officer (CEO) of Ghana International Trade and Finance Conference (GiTFIC), Mr. Selasi Koffi Ackom claims the Africa Continental Free Trade Area (AfCFTA) is one of the biggest trade areas across the world. Africa Continental Free Trade Area came into the establishment after 54 African countries agreed to combine and trade in resources to deliver
Africa’s goal of inclusive and sustainable development.
Speaking in a dialogue dubbed “Happy Development Dialogue” organized by Happy FM, Mr. Selasi believes the agreement reached to form AfCFTA was rapidly making it one of the greatest agreements the world has seen. “As we speak today, 36 African countries of a total of 54 African countries have deposited their instruments of ratification signed, making it the
swiftest and one of the biggest agreements the world has ever witnessed,” he said. Read More.